No, not a new position I just invented. I’ve been told that I am a flexitarian! A new word to me.

From Google: A semi-vegetarian diet (SVD), also called a flexitarian diet, is one that is plant-based or with the occasional inclusion of meat. In 2003, the American Dialect Society voted flexitarian as the year’s most useful word.

I still eat meat a little. I had cod last night and a few nights ago, delicious ultra-thin pizza thing called a Flammenkuerche, something I first tried in Alsace and stocked by Lidl from time-to-time. Topped with cheese and ham. But you’d be surprised, a lot of things I eat are pure vegan.Tonight was tofu and vegetable rice. My aim when I became a “flexitarian” was no more than being conscious about how much meat I was eating, vith a view to eating less of it.

I want to give an indication of my eyesight. When I was first coming back afer my reboot, I got myself into an online Sudoku game, just to kickstart the sharpening process. I still play it from time-to-time, mostly when I’m lying in bed with my tablet.

I’m still good with numbers, but my eyes mean I have to look at them that tad longer, to see them properly. I guess this is a slowness I’m stuck with. 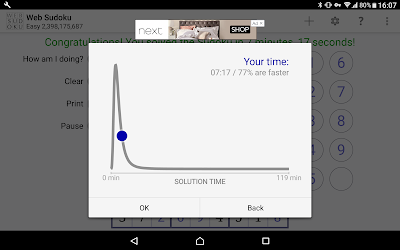